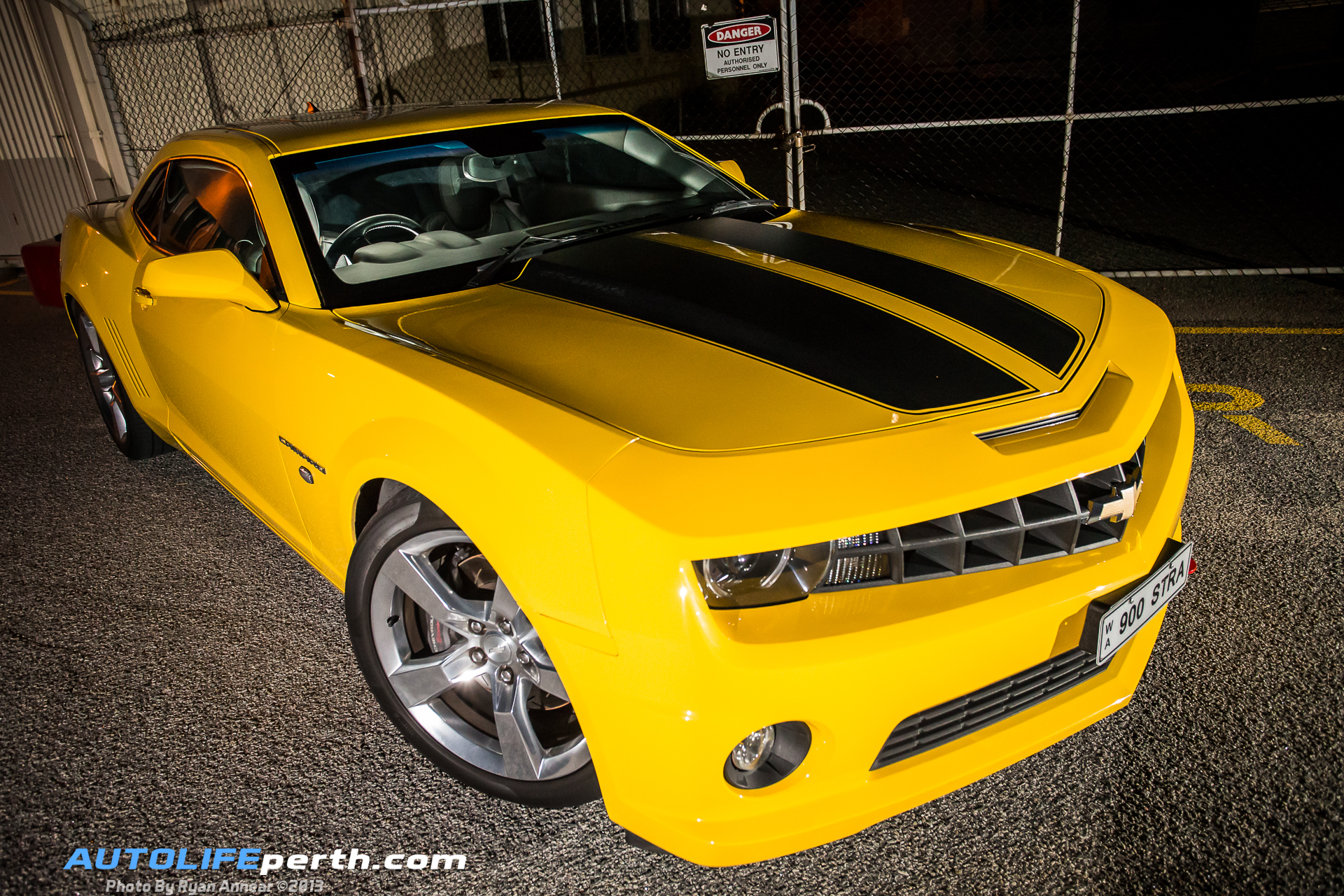 If there’s one car you could buy that will surely turn heads, it would have to be the car that’s known throughout the world thanks to the “Transformers” movie franchise, the yellow Chevrolet Camaro named “Bumble bee” , and Well Mike Bowser has done just that! 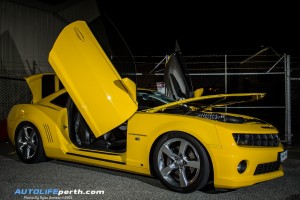 Mike’s 2010 Chevrolet Camaro is just pure awesome , Mike made the purchase in February 2012 because he was in the market for a E3 HSV Senator which had to be supercharged, big brakes and cammed from new, and with all of these options made the price well over the 100k, So while having a conversation with one of the lady’s at his work, she pointed out that they have a 2010 Camaro in Perth for sale, so with what he was going to spend on an HSV he could possibly buy a Camaro, within minutes he was on the carsales.com hunting it down.

He was after a good all-rounder “after all it’s my daily driver, I intend to use it at the drags, some track work & Show and Shines. I’d like to go over east to enter the Snowy Mountain 1000 next year.”

The purchase was made at Performance West, He called Maurits Heyim and arranged a test drive with a white Camaro they had up there, he informed Mike that they have a supercharged version which the Boss (Peter Rullo) was out driving, as luck would have it Peter Rullo rolled into the Yard and they showed Him the car, later that day Mike got to have a drive in it, He was hooked from then on!.  he had to have it!

Since Mikes had the car the biggest and most noticeable mod he has done to it was the Vertical doors that he installed himself, he tells us… 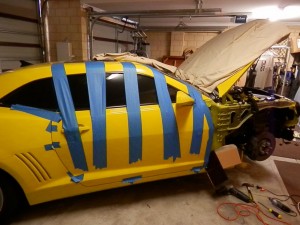 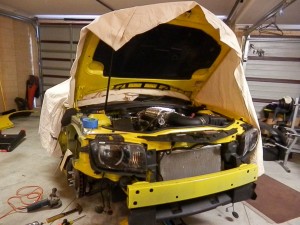 “I had seen them on the internet on some of the American car clubs, done some research and made contact with a car club called the “So Cal Head tuners” a 5th Gen Camaro Club on Facebook , Asked them a dozen questions on how much, where from and how practical they are? I had a trip planned to go to LA in Dec for my 40th and arranged to meet up with this club in LA, great bunch of guys as keen as all of us in Perth on Cosmetics & horsepower of their Vehicles. Leo from So Cal HT hooked me up with Vertical Doors Inc. Company and sorted out a great discount. The Kit took me 16 hours to install; I started the strip of the car after work on a Friday and finished late afternoon on Saturday.  The reason I installed this kit myself was because no one else in WA has installed a Vertical door kit on a 2010 Camaro so who do you go to?? So I watched a video on YouTube and read the instruction booklet at least a dozen times, sent a few emails to Vertical doors a few questions in regards to the cutting of the fender so to ensure I understood the task at hand and proceeded.” 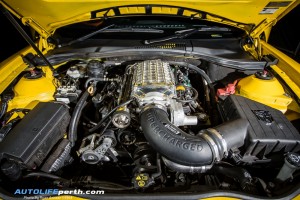 He’s Added some fake shaded vent graphic’s to the stock molded vents which are very deceiving to the eye “I guarantee you’ll touch them to see if their real”, Transformer language signs on the hood scope, Tow hook and fire extinguisher for Antilag’s Racewars, Brake upgrade to DBA4000 slotted rotors and pads for the Brembo kit, a Touch up tune with Eddy Tassone of Active Automotive, made all four rear tail lights working and removed custom reflectors.

The built date of the car is September 2009 and shipped to Australia in March 2010, the right hand drive conversion was performed by Performax International in Queensland and then shipped to Perth to Peter Rullo of Performance West , this was their research and development car, All the Mods were carried out at the shop by Simon Iseppi such as the Suspension upgrade to Pedder’s Coil overs all-round , Magnuson TVS 2300 Supercharger (@4000Klms) , Cammed med-large size unknown , Pulleys kit for charger 9 -12psi , Custom 3” Exhaust , Large Intercooler , 1,7/8 long flow headers , and then Tuned by Eddie Tassone of Active Automotive  , Approximate figures of cash spent on the car would be around the   130k+ mark so far.

Some of the immediate plans for the car are a Custom air induction which Mikes doing myself, 20×10 285’s front, 20×11 315 Rear “this should help with my traction issues”

Future Plans are a Fuel system upgrade to a ZL1 Fuel pump, an Electric Fuel booster, some Interior Lighting including footwells and something special planned in the trunk (boot) 😉 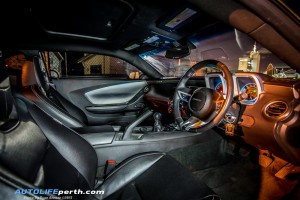 “ Every time I drive past kids in the street or kids see it when in the back of their cars they instantly recognize it as Bumblebee and wave, it brings a smile to all that see it, I’ve had such a great enjoyment of driving it as it does seem to bring out a few camera phones, I’m photographed every time I go out, if I leave it parked there will be a crowd gathered outside it or it has hand prints on it from someone posing for a photo next to it. “I’ve had a school bus stop on their way to a sporting event with every kid getting off with IPhones in hand to take a photo. The one question I get asked the most “does it transform” … “

“And what’s with the number plate? 900 STRA is what’s on Bumblebee in the movies, “Mike doesn’t know what it stands for, “maybe nothing but I thought it would be a nice touch.”

Mike Loves arriving to a cruise meet point and opening the doors up, and seeing people’s faces as their opened.

“Antilag’s Racewars was the best event that I’d attended to date. I entered as a VIP witch gave us access basically to race your car whenever you wanted. Rolling start 800m was the best. Such a great turn out of very powerful & expensive cars, with great people. It was Sad to see Eddy roll the GTO but glad they’re both ok.” Mikes looking forward to next year’s Racewars. “Hopefully I have bigger balls to attack the 1000m next time. “

One memorable drive was for a young man called David, a terminal cancer patient, it was his wish to be driven in an American Muscle car, so Mike came by the family’s house to meet with him, his Partner Claire and Parents, he then drove him around his neighborhood for a while, sadly he passed away a few weeks later, Mike says it was a “very humbling experience.” 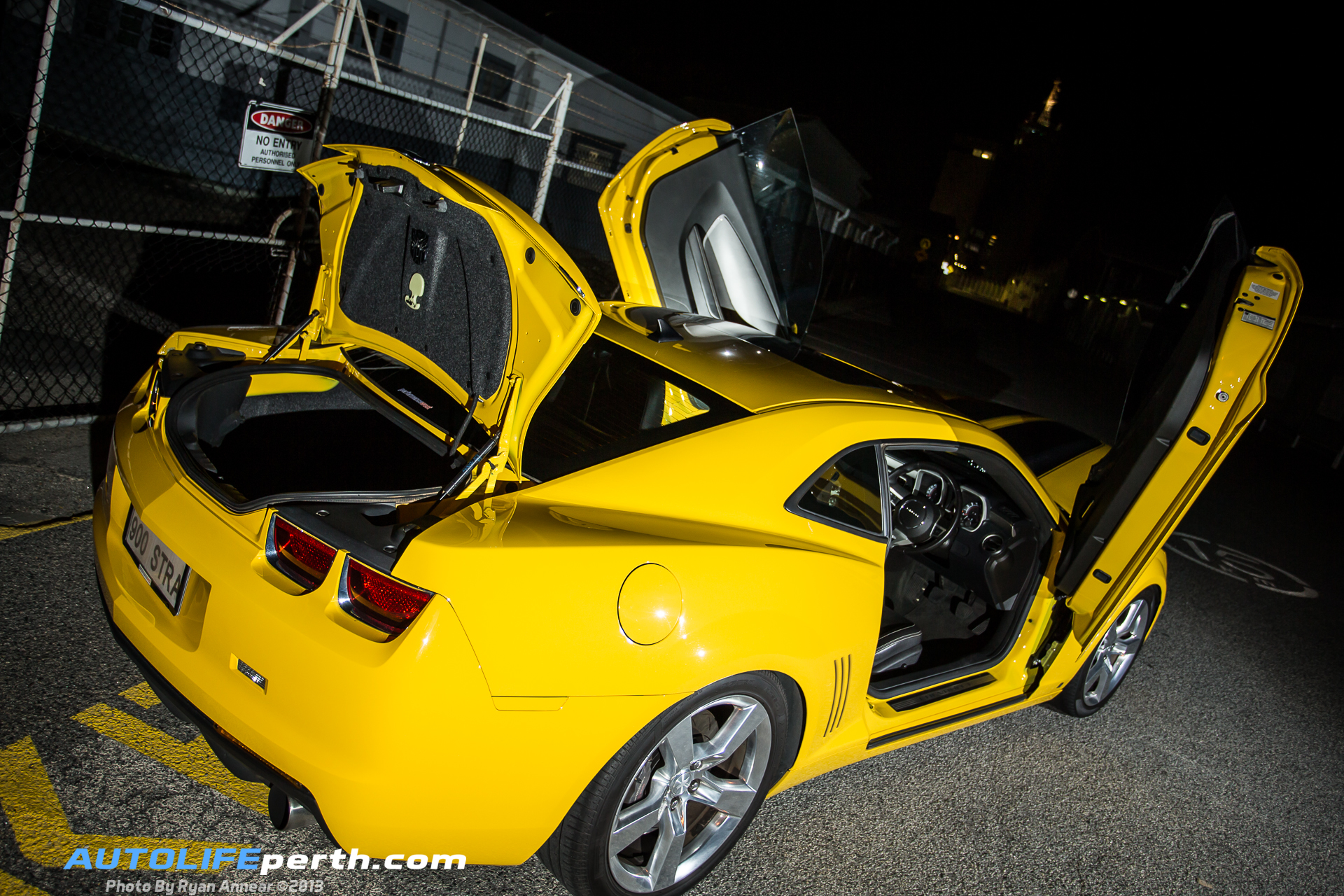 thank you and acknowledgments :  Maurits Heyim, Peter Rullo and Simon Iseppi of Performance West and David Hancock the new GM

Friends & Family for listening to me talk constantly about my car.

Apologies to my neighbors J for the cold starts in the morning, it maybe a little noisy when I leave for work or when I come in from a late cruise.